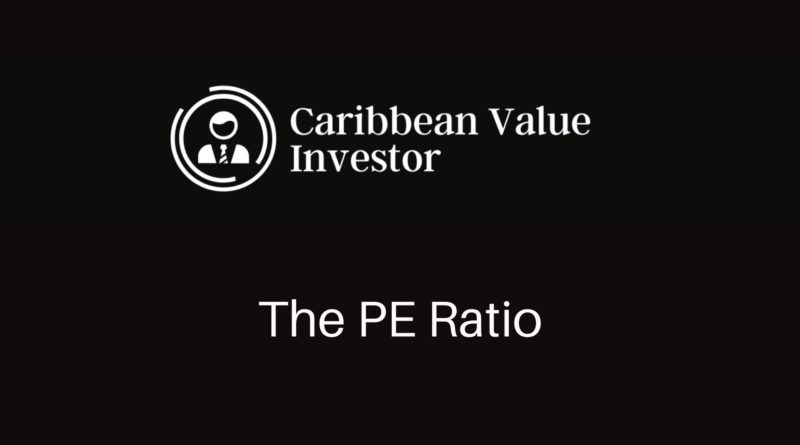 The PE Ratio is one of, if not, the most, often used valuation metric. Many investors rely heavily on the PE ratio when deciding whether or not they should purchase a particular stock. There are even some investors who only utilise the PE ratio, devising various strategies around the metric. In this article, we are going to discuss the PE ratio in full, we will look at how it is calculated and why it is so significant to investors. Next we will look at what the PE ratio really tells investors and highlight two reasons why we should take PE ratios with a grain of salt.

The Price to Earnings Ratio, or PE ratio for short, is a relative valuation metric that investors use to gauge whether a stock is overvalued or undervalued. The PE ratio is calculated by dividing a company’s stock price by the company’s earnings per share, its EPS. The EPS can be found on the company’s income statement from the Audited Financial Statements or the company’s Annual Report (10K). If it is not there then you can calculate it by taking the company’s net income and dividing it by the number of shares in issue for that period.

To calculate the forward PE ratio, the investor would have to come up with an estimate for the earnings in the current year and then divide the current stock price by that value. This is not as easy as it might sound since there are a lot of factors that an Analyst or Investor will need to consider when trying to estimate earnings. These factors vary greatly and can include such things as tax breaks, new tax penalties, litigation expenses, etc. The investor will also have to consider the effects that going into new markets, expansion, acquisitions, and so on will have on the company. Furthermore, each of these factors could affect the company’s earnings in either a positive or negative way.

The Importance of the PE Ratio to Investors

Now that we understand what the PE Ratio is and how to calculate it, let’s talk about why the PE ratio is so important to Investors. Remember earlier I said that the PE Ratio is a relative valuation method? Well, that is the first reason it is so important to investors. It is a valuation method. In other words, Investors use it as a way to determine whether a stock is undervalued, fairly valued, or overvalued.

Generally, a low PE ratio is taken to mean that a stock is undervalued and a high PE is taken to mean that the stock is overvalued. However, there is no clear-cut number that can be applied to all stocks when it comes on to the PE ratio. In fact, one stock can have a significantly higher PE ratio than another and still be a better bargain. I am going to explain this a bit further when I talk about why investors should take the PE ratio with a grain of salt.

In my opinion, the general suggestion of buying stocks with low PE ratios is somewhat incomplete. I believe, it is more accurate to say that for two similarly sized companies, operating in the same sector, with similar operations, the one with the lower PE Ratio is more attractively priced.

Let me explain using an example. Let’s say we have two companies, COMPANY A and COMPANY B, each with a market cap of 1 billion dollars (so similarly sized) and both in the toilet paper manufacturing business. We can compare the PE ratios of these companies.

Let’s say Company B has a stock price of $30 per share and an EPS of $3.00. Company B’s PE ratio would be 10X. If both companies have similar operations and are growing at the same rate, then the one with the lower PE ratio is cheaper. Company B would be the better investment based on the PE ratio method of valuation despite having a higher stock price. In fact, Company A would be two times as expensive based on this metric.

What does the PE Ratio tell investors?

This is also one of the reasons why it became ‘common wisdom’ to buy stocks with lower PE ratios. Let us now look at why this might not always be the wisest decision.

PE Ratios can be misleading to the Investor

As I said earlier, it is generally accepted that a low PE Ratio is favourable and a High PE Ratio is unfavourable but this can be very misleading. Let’s look at another example:

Let us say that we have two other companies. Company X and Company Y. Both of which, are in the technology sector. Company X has a market cap of 50 billion and manufactures computers and hand-held devices. Its stock sells for $100 per share and it reported an EPS of $12.00 per share in their last annual report. The EPS was down from $15.00 the year before. I will also add that Analysts expect that Company X will report an EPS of $9.00 per share for the current year. Company X, therefore, has a trailing PE of 8.33X earnings and a forward PE of 11X earnings. Work these out and verify them.

Conversely, Company Y has a market cap of 40 Billion. The company is a software company and is the owner of a social media application that has gone viral within the last 6 months. Company Y stock sells for the same $100 per share and the company reported an EPS of $3 per share in their last 10K filing. Based on the number of downloads for the company’s new app, and the rate of growth in the download numbers, Analysts expect that the company will report EPS of $5.00 for the current financial year.

Company Y, therefore has a trailing PE of 33.33 and a forward PE of 20X earnings at the current price.

Analysts recommend that investors buy Company Y and sell Company X but why? Why is Company Y a better a buy than Company X despite its forward PE ratio being almost 2 times as high and its trailing PE, almost 4X higher than that of company Y. The answer lies in operations and is more qualitative than quantitative.

Company X is a larger company but is experiencing a decline in its profitability. It is possible that low-cost manufacturers have entered the market and are offering similar products at a lower price than Company X making it harder for them to compete. Due to the nature of company X’s business they will have to spend a lot more money if they want to expand or spend more on marketing. This could further erode the company’s profitability.  On the other hand, Company Y’s profitability is growing. It just launched a new app that has gone viral. Advertisers will be more attracted to the company in order to be able to show ads to the growing number of users of Company Y’s app. Furthermore, Company Y might not have to spend as much in order to increase profitability. These factors make Company Y a more compelling offer to investors as they are more likely to see an increase in the value of their portfolios if they invest in Company Y than if they were to invest in Company X.

The PE ratio is calculated by dividing a company’s stock price by its earnings per share or EPS.

The PE ratio is a relative valuation method. It is used to compare other stocks in the same sector as well as to the market as a whole.

The PE ratio tells investors how many years it would take for a company to earn back the amount paid for its stock.

Investors should be careful to not just rely on the PE ratio since it can be misleading at times.

One thought on “The PE Ratio Explained in Full”