The gaming sector is truly a money-making sector, a high reward if you like. The age-old telling of high reward equals high risk is once again true. The production cost for a good quality game can be astronomical, but it might not earn back the cost should the game be a miss. Thus, high risk. I can see the gaming sector continue its growth, especially considering more girls are getting in.


The need for entertainment is steadily increasing. Internet access is also a huge factor here. As the third world continues to evolve, we will likely see gaming exploding in this region just like it has in the west and China. Therefore it should be considered a part of any long term portfolio. The gaming sector higher than average volatility creates some good trades for us traders, today we will go over two of these.

There are three companies within the gaming industry I keep an eye on. The first one is Apple. Few people know this, but around 80% of the revenue from the App Store comes from gaming apps. Apple is by many metrics the biggest “gaming” company. Understandably most people don´t acknowledge Apple as a game company, therefore, we won´t go over them in this list.

The first company is Electronic Art´s. EA is a gaming company with a lot of games under its belt, most notably The Sims, Battlefield, Star Wars, and recently the Fortnite contestant Apex Legend.

If we look over at the chart, we get hit by a beautiful picture. EA has formed a typical triangle, ascending ever so slightly. It is closing in on the Apex, where two options are available. Either it breaks upwards, or downwards. Whichever direction it chooses, odds are it will continue that new trend for some time, creating a trade opportunity for us. 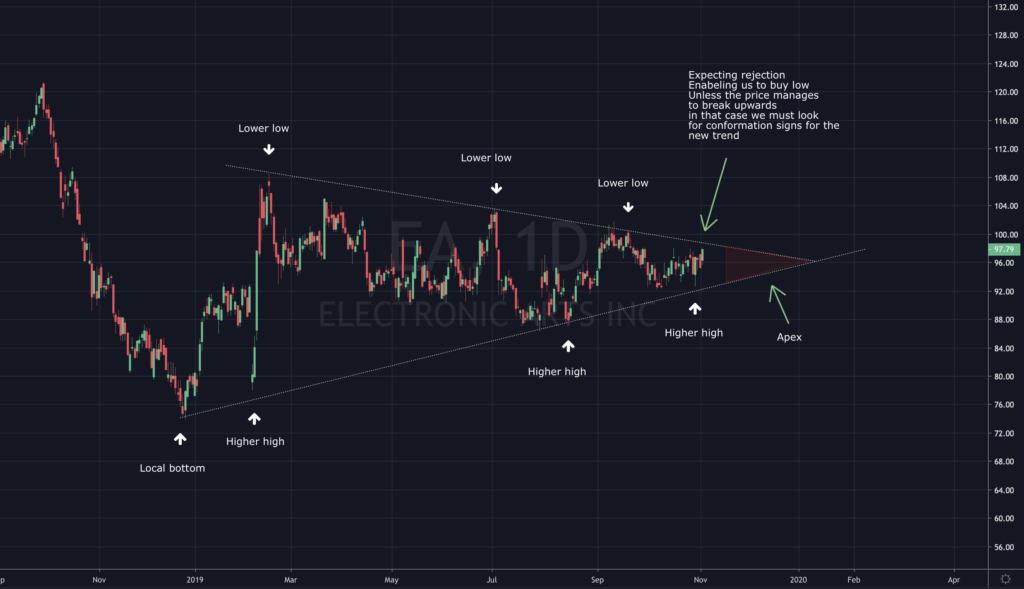 For now, it´s closing in on-resistance, this is a potential place where it can break up. Personally, I find a rejection more likely. Thus enabling us to go long when it retest support.

TTWO is a huge gaming company. They are the owners of the famous gaming production company Rockstar. Wich holds one of this year’s most popular games, Red Dead Redemption 2. Rockstar is also the developing company of GTA. GTA 5, was not only the best selling game of all time. It was the best selling entertainment product. Beating any other game, album, movie, etc. With total revenue of six billion, and more than 100 million copies sold.

The TTWO chart is in many ways similar to Tesla. Where TSLA had three supports all aligning with our buy target. TTWO has two. The first support ended up acting like resistance for a moment, much like in TSLA´s chart. While the last support only has two touches, meaning this last touch would confirm the support line. For now, we are on hold on TTWO. Hopefully, the price falls to 108-106$, this will be out buy area.

A brief history of AMZN and how to trade it