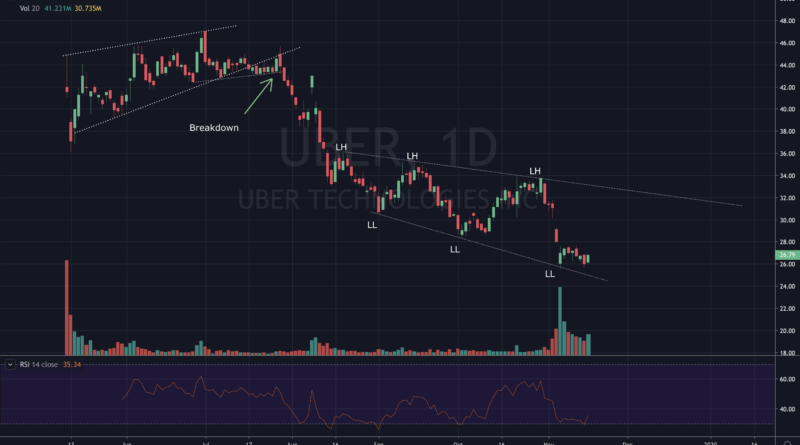 Uber is a very special company. It has, in many ways marked a new area within stocks and business. A sharing economy, where anyone can become their own boss, eventually financial freedom. It is the next step of capitalism at it´s finest. Where it is not the “rich and powerful” that owns the taxi companies, now you can “own” your own company. Choosing your own hours, essentially also your salary. The same concept goes for Airbnb.

Where the average Joe can own his own “mini-hotel”, renting it out, over time reinvesting until he is financially independent. Power has been taken from the corporations, and given to the people. Uber has marked a new area, an area where sharing is the new norm.

Uber is the world’s biggest rideshare company in the world. Running 70% of the rides in the USA, with Lyft doing almost 30%. Essentially running a duopoly in the United States and most other countries. The idea of Uber is genius. Imagine, you have a car, you have lots of free time after work, and you want to make more money on the side, to pay back your mortgage. Well, with Uber you can. Simply register on the app, and start picking up costumers. Thanks to the in-house rating system, unprofessional drivers will get a lower rating, until they are squeezed out of the system.

Since the IPO Uber had a hard time. First, they had to lower their IPO price, followed by the price closing red on their first day of trading. Over time, Uber created a bear flag, continued by the price breaking down, sending it straight down a total of 42%. As you can tell, Uber has shown weakness, doing lower highs, and lower lows. As a rule of thumb, this reflects a bearish trend. This setup is called “broadening wedge”.

Uber seems to have found some support, as well as doing a double bottom. This is further confirmed by the increased volume, I believe institutional investors are finding this price a comfortable level to add Uber to the portfolio, thus the spike in volume. You find the volume under the price, each day of trading gets its own day of volume. 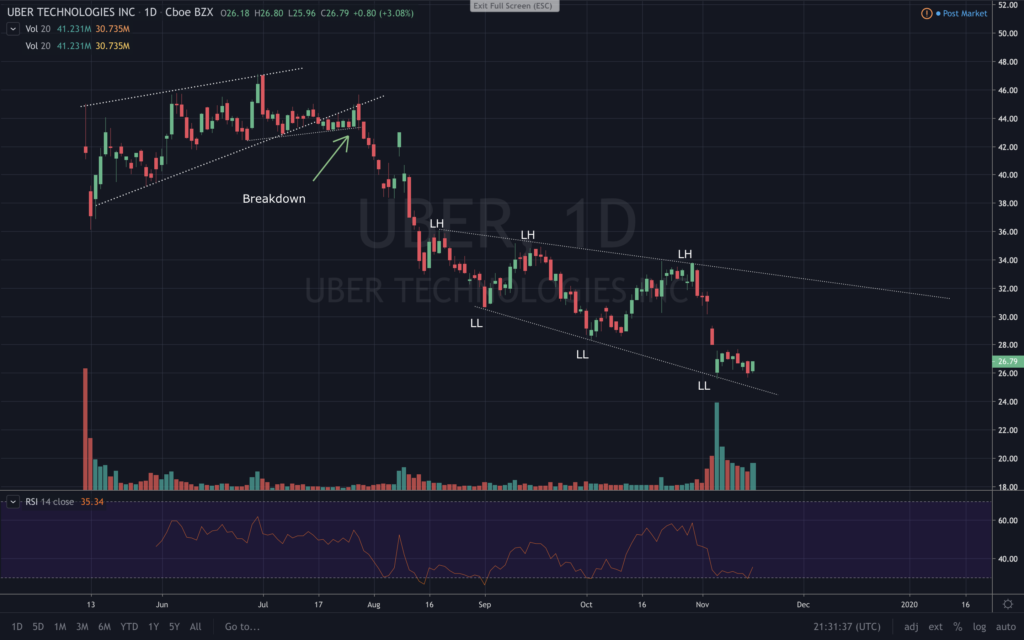 Since Uber is such a growth company, and I believe they are on their way to becoming profitable, just like Tesla, I can see the trend turning bullish. The question is simply when. Therefore I urge everyone to use stop-loss, in case Uber still has one leg down before making new highs.

Uber is not showing the most strength, but for those itching for trade, here you have one. The goal is simple, buy at support, sell close to resistance. After buying at support, you should set a stop loss at 24-25$. Thereafter you should watch the previous low, at 28$, this is a resistance Uber needs to break to continue. The next resistance is the descending trend line. Watch this area close and prepare to sell. Eventually, should the price continue upwards, breaking resistance, you can buy back and let the price increase. For the safest trade possible, increase the stop loss as the price continues to increase, to ensure a profit no matter what.

November 6, 2019 0
Translate »
Want to learn more about the Stock Market and Investing?
Enter your name and email and get the our articles directly in your inbox... it's FREE!