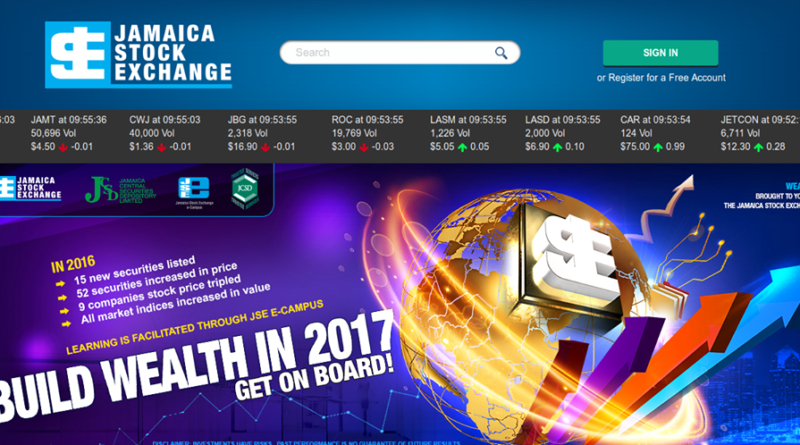 The Jamaica Stock Exchange (JSE) Combined Index ended yet another year with positive growth. The index which comprises stocks listed on both the Main and Junior markets gained 89,022 points this year to close at 384,556.48 points. An increase of 30% from the 295,534 points that it started 2018 with. The increase is attributed to many main market stocks going up by double digits and new listings on both the main and junior markets. Taken individually, the Main Market index was up 31% while the Junior Market was up some 15%.

Main market stocks outperformed the majority of juniors. There are a few reasons for this, the first might be that many Junior Market Stocks ended 2017 on a high and were largely unattractive to investors. On the contrary, many of the better known Main Market companies were either fairly valued or undervalued at the end of 2017. Notable examples were Grace Kennedy Limited, Salada Foods, Mayberry Investments, and to a lesser degree, National Commercial Bank Financial Group.

The TOP Performers all gave triple digit returns. Barita Investments stock went up by a whopping 611.38%. Next was SSLVC up 282%, Derrimon Trading Limited had a 10:1 stock split in September, it’s stock is up 218% after Caribbean Value Investor corrected for the split. Salada Foods gained 202%. Palace Amusements with a gain of 159% was pushed to the number 6 spot by CAC 2000 limited which recorded a gain of 160%. Shipping and logistics company, Kingston Wharves recorded the next biggest gain (137.51%). The final three spots in our top 10 were taken by Junior market stocks. Newly listed pharmaceutical distributors, Indies Pharma was up 112%. Express Catering Limited gained 100% and Stationery and Office Supplies ended 2018 up 73.96%.

All IPOs Not Equal

2018 saw quite a few new listings, however, not all the new comers performed favourably. High profile listings such as Everything Fresh Jamaica Limited, Sygnus Credit Investments and Wisynco Group Limited, ended the year among the worst performers. Stanley Motta Limited which also listed this year was basically flat. GWEST was the worst performing Jamaican denominated common stock, losing all of 70% of its value since January 02, 2018.

The Best and Worst Performers as at the Last Trading Day – December 31, 2018

November 16, 2017 0
Translate »
Want to learn more about the Stock Market and Investing?
Enter your name and email and get the our articles directly in your inbox... it's FREE!