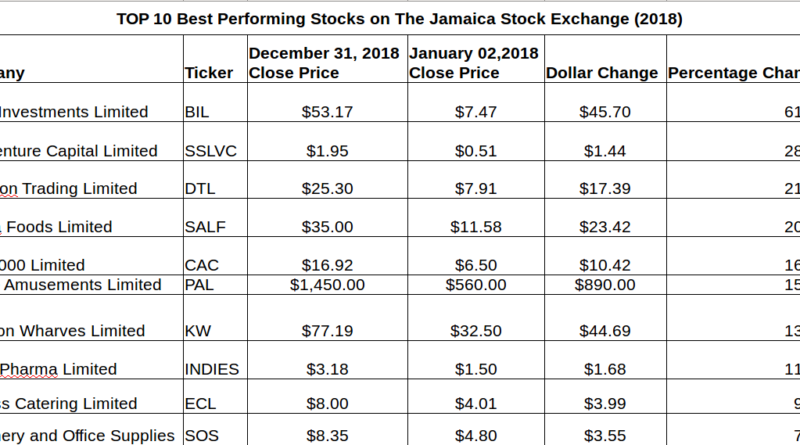 TOP 10 Stocks on The Jamaica Stock Exchange for 2018 did exceptionally well. Eight (8) of the ten stocks made triple digit returns for investors. The average return of the TOP Best Best performing stocks was 205.84%, dwarfing the JSE Index’s return of ~30%.

NB: This article is an update to a previously published article on Caribbean Value Investor titled: TOP 10 Winners and Losers on the Jamaica Stock Exchange 2018

The Top 10 Stocks on the Jamaica Stock Exchange by Price appreciation were:

The table below shows the Closing prices for each of the TOP 10 Stocks on the Jamaica Stock Exchange on December 31, 2018 as against the closing prices on January 02, 2018.

Business Description of the TOP 10 Best Performing Stocks on the Jamaica Stock Exchange for 2018.

Barita Investments Limited is a limited liability company incorporated and domiciled in Jamaica. The company is a licensed securities dealer and has primary dealer status from the Bank of Jamaica (BOJ). It is licensed under the Securities Act and regulated by the Financial Services Commission (FSC). The company’s ordinary shares are listed on the Jamaica Stock Exchange (JSE). The registered office of the company is 15 St. Lucia Way, Kingston 5. The principal activities of the company and its wholly owned subsidiary, Barita Unit Trusts Management Company Limited (BUTM) and its associate (collectively referred to as “the Group’) are stocks and securities brokerage, money market activities, cambio operations and funds management. The company underwent a change in ownership in 2018.

SSL Venture Capital Limited is a relatively new company to the Jamaica Stock Exchange. The company is the result of a rescue of Music Published C2W MUSIC. In the rescue, the majority shares of C2W MUSIC was acquired by Stocks and Securities Limited. Twenty percent of the shares remained in the hands of the public and continued to trade on the Jamaica Stock Exchange. After a successful rescue, the operations of the company were changed to that of a typical venture capital firm and a new management team was installed. The ticker was subsequently changes from $MUSIC to $SSLVC. SSLVC has announced equity acquisitions in 3 portfolio companies namely, Blue Dot Data Intelligence, MUSE 360 Agency and Bar Central Jamaica Limited.

Derrimon Trading Company Limited (“the Company”) is incorporated and domiciled in Jamaica.

The principal activity of the Company is the wholesale and bulk distribution of household and food items inclusive of meat products and the retailing of those and other food items and meat products through the operation of a chain of outlets and supermarkets. The registered office of the Group is located at 233 and 235 Marcus Garvey Drive, Kingston 11. The Company’s shares were listed on the Junior Market of the Jamaican Stock Exchange (JSE) on December 17, 2013. In January of 2018, the company acquired 23,379,208 share of Caribbean Flavours and Fragrances, another publicly listed company on the JSE. Derrimon Trading Company Limited (DTL) later announced an arrangement to purchase the entire shareholding of Woodcats International Limited.

On July 05, 2018, the board of director proposed, among other things, a 10:1 stock split. Shareholders approved the stock split at the annual general meeting held on August 22, 2018.

Salada Foods Jamaica Limited is incorporated and domiciled in Jamaica. Its principal activity is the manufacture and sale of instant coffee and roasted and ground coffee beans and other consumer products. The company’s registered office is located at 20 Bell Road, Kingston 11. Effective February 1, 2017, the company outsourced the distribution of its core products in local market to its subsidiary, Mountain Peak Food Processors Limited. During the year, operations of another subsidiary, Pimora Company Limited were discontinued. The company is listed on the main market of the Jamaica Stock Exchange. The largest shareholder of the company is Resource in Motion Limited which controls 76% of the voting rights in the company.

*Extracted in large part from the 2017 Annual Report.

The principal activities of the Company are the sale of air conditioning equipment and installation and maintenance of such systems. The Company’s registered office is 231Marcus Garvey Drive, Kingston 11.

CAC 2000 Limited is a succession of a number of businesses starting with Webster’s Engineering in the late 1920’s. In the mid 1960s, the ICD Group (formerly the Mechala Group) bought Conditioned air Corporation and merged it with another company to form Conditioned air and Associated Contractors, or “CAC” for short. CAC was later merged into the iconic “Homelectrix”, which was a household brand in Jamaica for many years.

When Homelectrix was sold in 1990s, the team of Steven Marston and Colin Roberts purchased 49% of the newly formed Conditioned Air and Associated Contractors (CAC). On July 24th, 2000 the Company was incorporated, and the remaining 51% was purchased on August 18th, 2000, and that is the Genesis of the Company’s name: “CAC 2000 Limited”

To see the TOP 10 Best performing stocks on the Main market, check out this article from ICinsider.

To see the TOP 10 Best performing stocks on the Main market, check out this article from ICinsider.

April 13, 2018 0
Translate »
Want to learn more about the Stock Market and Investing?
Enter your name and email and get the our articles directly in your inbox... it's FREE!