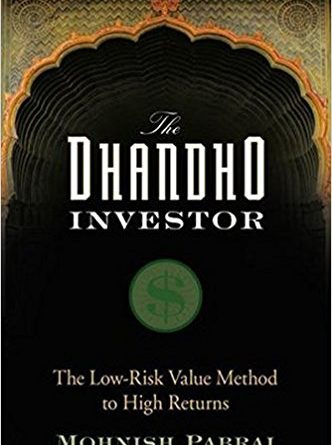 The Dhandho Value Investing Framework was made popular by Mr. Mohnish Pabrai. Mohnish Pabrai is an Indian Investor, Founder of the Dakshana Foundation and Author of “The Dhandho Investor”. Mr. Pabrai is also the Managing Partner of Pabrai Funds and once paid USD 650,000 to have lunch with Warren Buffett.

Dhandho is a Gujarati word that literally translates to BUSINESS. Though often thought to be from Gujarat in India, Mohnish admits that he actually got the word “Dhandho” from his college roommate. It was his roommate that actually hailed from Gujarat. There is an inextricable link between business and investing. Warren Buffett once said, “I am a better Investor because I am a businessman and I am a better businessman because I am an investor.” Dhandho as a strategy is one where there is limited downside and remarkable upside. Mr. Pabrai gives multiple examples in the book, including the cases of the Patels, Vigin Group and Microsoft.

Rule number 1 according to Mr. Warren Buffett is “Don’t loose money” and rule number 2, is “Don’t forget rule number 1.” The essence of the Dhandho framework is to abide by these rules. He makes special reference to the cases of the Patels, Microsoft and the Virgin Group. In reference to Microsoft, Bill Gates moved to New Mexico to start MicroSoft while in his undergraduate years. This move was one of high uncertainty but low risk. If Microsoft did not work out Bill had the possibility to return to Harvard, finish his degree and get a relatively high paying job. He had no capital so there was basically no financial risk. Mohnish asserts that when uncertainty is high and risk is low (limited downsize) stocks will generally be mis-priced and they will likely be undervalued. This single statement is at the heart of the Dhandho Value Investing Framework.

The Patels from Gujarat owned more than sixty percent (60%) of the motels in the United States by exploiting this very simple principle. The Patels came to the US with very little resources but rose to prominence by owning single motels and reducing the costs of operations to create free cash. They would then use the free cash from the business to buy another motel and repeat the formula.

As part of the Dhandho Value Investing Framework Mr. Mohnish cautions against overuse of Excel spreadsheets. In fact, he asserts that Excel has nothing to do with investing. The Dhandho Investing Framework requires that we put ourselves in owners’ shoes. It requires that we see the business from the perspective of the person running the business. As business owners, most CEOs are looking at no more than three (3) to five (5) variables. Mr. Pabrai suggests that The Dhandho Investor should look at those same 3 to 5 variables. These variable will help the investor to make his decision on the basis of where the business will be and not where the stock will be.

In his book, Mr. Pabrai shows that if an investor compounds money at 26% per year then his money doubles every 3 years. He uses this to show that if you buy a stock at less than half of what it’s worth and just hold on it on the basis that it will get to its true value within three years then you would have made your 26% and then some.

What does it take to exercise the Dhandho Value Investing Framework

Mr. Pabrai says that the single most important trait for someone in applying the Dhandho Value Investing Framework is PATIENCE. He surmises that Markets have a way of misleading investors, the tickers tend to make us think we need to take action now. Nothing could be further from the truth. Mr. Pabrai also cautions that the investor should not focus so much on the stock market but rather on the change in the businesses. You don’t need to double your money every 3 months, every 3-5 years is quite fine. The successful Dhandho Investor must also stay within his circle of competence. Warren Buffett once said that it is not the size of the circle that matters but knowing the boundaries. If you own the 20% in the local car Dealership, the best residential building, and the best commercial building then you will do very well as an investor.

To reiterate, the successful value investor must think of buying a stock as if he was buying part ownership in the BUSINESS. When applying the Dhandho Value Investing Framework, we must not think of investing in a stock. If we are interesting in a business, then as a minimum, we must know what the entire business is selling for. We must also gain an understanding of how much it will be worth in 10 years. Further, as a Dhandho Investor we must be willing to put ¼ of our family’s wealth (inclusive of our own) into that investment. If we are not willing to do that then we shouldn’t put $1 into that business. In part two of this article we will look deeper into the Dhandho Framework and get more specific as to how to’s. In Part 3 we will evaluate three Caribbean companies from a historical point of view using the Dhandho Framework. See you then.

What is the Difference between Disruption and Innovation

What is the difference between Day-Trading and Investing

July 28, 2018 2
Translate »
Want to learn more about the Stock Market and Investing?
Enter your name and email and get the our articles directly in your inbox... it's FREE!