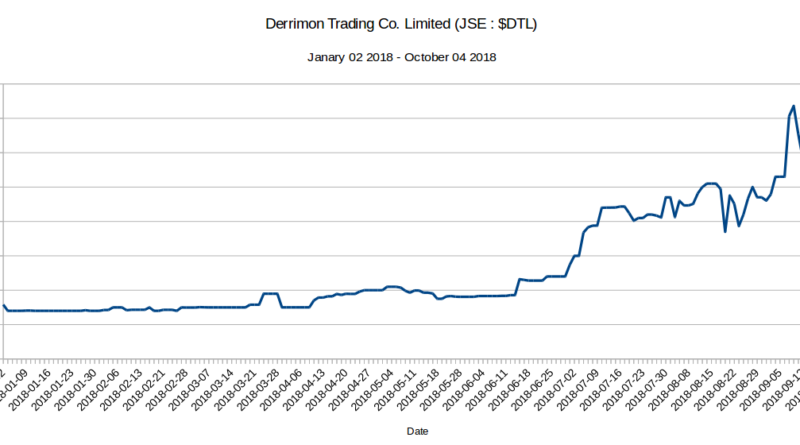 The Jamaica Stock Exchange has been doing exceptionally well since the Summer of 2014. In 2015, the Jamaica Stock Exchange was the number one performing Stock Exchange in the world according to Bloomberg. The JSE Combined Index was up 100%. In 2016, the index grew by a further 28.73%. In 2017 the JSE Combined Index was up 42.81% out pacing even the very famous S&P500 index which was up only 21.83%. In each case there were stocks that went up north of 100%. In this article, we will look at 5 JSE stocks that have seen price gains of 100% or more since the start of 2018. More importantly, we will take a rare-view look at some of the factors that contributed to the tremendous price appreciation in each case.

In January of 2018, the company acquired 23,379,208 share of Caribbean Flavours and Fragrances, another publicly listed company on the JSE. Derrimon Trading Company Limited (DTL) later announced an arrangement to purchase the Entire Shareholding of Woodcats International Limited. DTL recorded net profits of $J 281,796,000 on revenues of J$ 6.72billion and earnings per share of J$0.92 for the 2017 Financial year.

Palace Amusement was the biggest local beneficiary of the Black Panther Phenomenon. The movie which was released in January (2018) attracted thousands of Jamaicans and remained in theaters for well over two months. Marvel fans, and critics, further aided the company’s financial performance when they flocked the cinemas again in April to see Avengers 3. The stock started the Calendar year just below the J$600 mark and rocketed to well over 1300 by the end of June. Limited supply of the stock has resulted in a new benchmark asking price for the stock being set as depicted by the chart below.

Investment outfit and Brokerage house, Barita Investments Limited is up over 139% since January based on today’s closing stock price. Caribbean Value Investor attributed the stock’s massive up to the change in the majority of the company. The majority owners began talks to sell their stakes in the company last year.

Last year, a team of shareholders led by one major investment house orchestrated a restructuring of the company’s board. A new President and CEO was installed in the form of Ann Dawn Young Sang. Also, in February of last year, the company acquired the operations of Caymanas Track Limited through a subsidiary Supreme Ventures Racing & Entertainment Limited (SVREL). This year the company made record profits amounting to over J$ 2 billion. Caribbean Value Investor attributes SVL’s stock performance not only to the acquisition of Caymanas Track Ltd but also to the improvements in the overall economy.

The Business Process Outsourcing (BPO) industry has been growing in Jamaica over the past 5 years. “Call Centre” companies such as Sutherland Global that were not in the island 10 years ago have expanded to having centres in all major cities. CAC 2000 Limited has benefited handsomely from this growth. For the nine months ended July 31st 2018, the company reported a 45% increase in net profits. Revenues of $908,814,119 were recored as against $799,181,282 for the corresponding period in 2017.

October 10, 2018 0
Translate »
Want to learn more about the Stock Market and Investing?
Enter your name and email and get the our articles directly in your inbox... it's FREE!