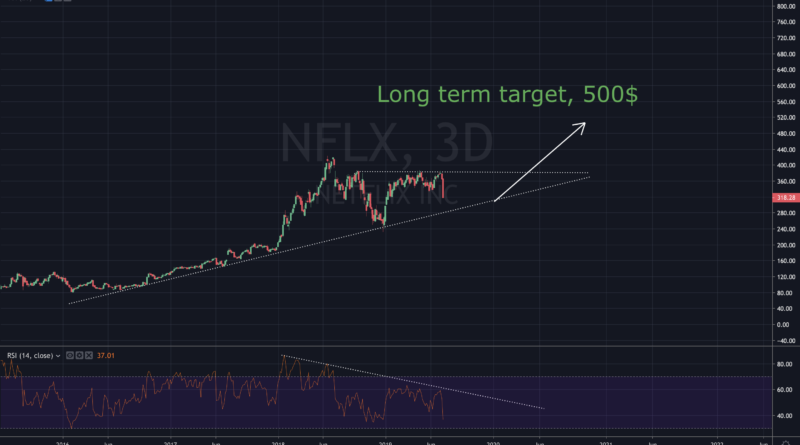 My favorite trades are the ones following abrupt price action. For instance, my Tesla trade (up 45% in six weeks) only took place after a significant selloff. Same goes for Snapchat 5$ buy, now trading up 220%.

These trades are my favorite because of three things. First, they often bring higher ROI. Big price drops, call for significant gains, vice-versa. Secondly, the trade itself is usually within a lesser time period, greater volatility gives us the results we want in a shorter time frame. Essentially helps me minimize potential risk by staying in cash when the market is dormant. Lastly, but most importantly, the risk-reward ratio is in my favor. When a fundamentally sound company loses 40% in value, chances are it won´t lose another 40%. The profits outweigh the loss, over several trades, you will notice the compound effect.

Domino´s just shared their quarterly report and the market took it negatively. The report itself was seen as mixed. DPZ delivered adjusted earnings per share of $2.19, better than the expected $2.02. However, they missed earnings by 20-something millions. Mostly due to bigger competition in the delivery space, like Uber-eats. Enabling smaller restaurants to deliver food at the same prices as dominos. Fundamentally, there is too much uncertainty for me to invest, but there might be a trade opportunity opening up.

As you can tell from the chart, DPZ formed a strong resistance at the 300$ mark. It stayed dormant for some weeks before this quarterly report hammered them down. For now, I won´t take a position in DPZ, but I will be paying close attention. If DVZ ends up touching our support and turning bullish, the risk-reward ratio would be too good to miss out on. One of the most prominent signs to look for is the infamous morning doji. 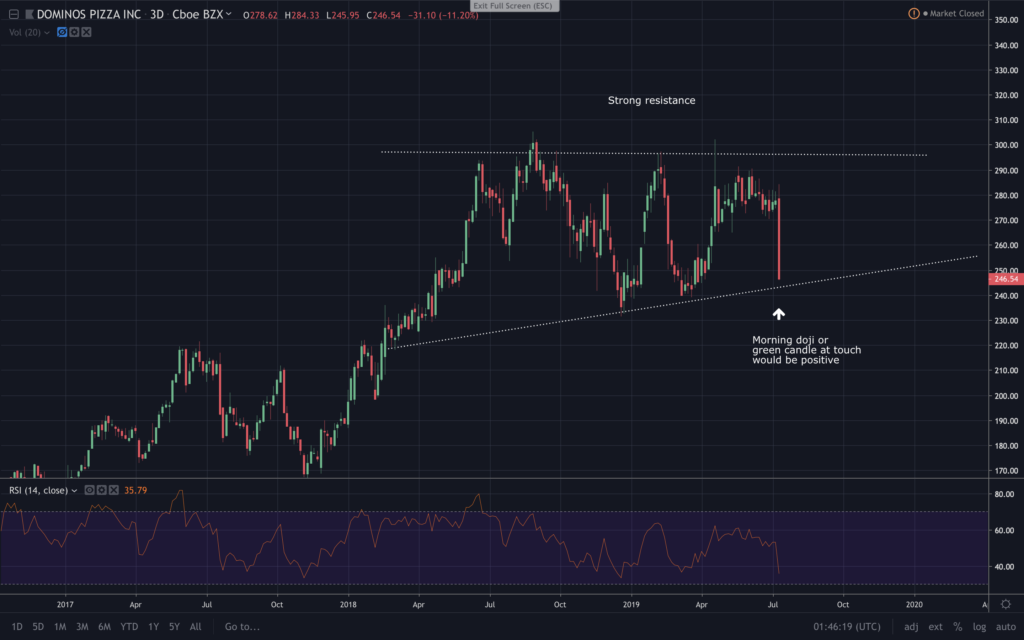 Update: from time of writing, till now, DPZ touched support and turned bullish. It is still possible to buy at this level, but the risk-reward is not as good anymore. For now, eyes on. 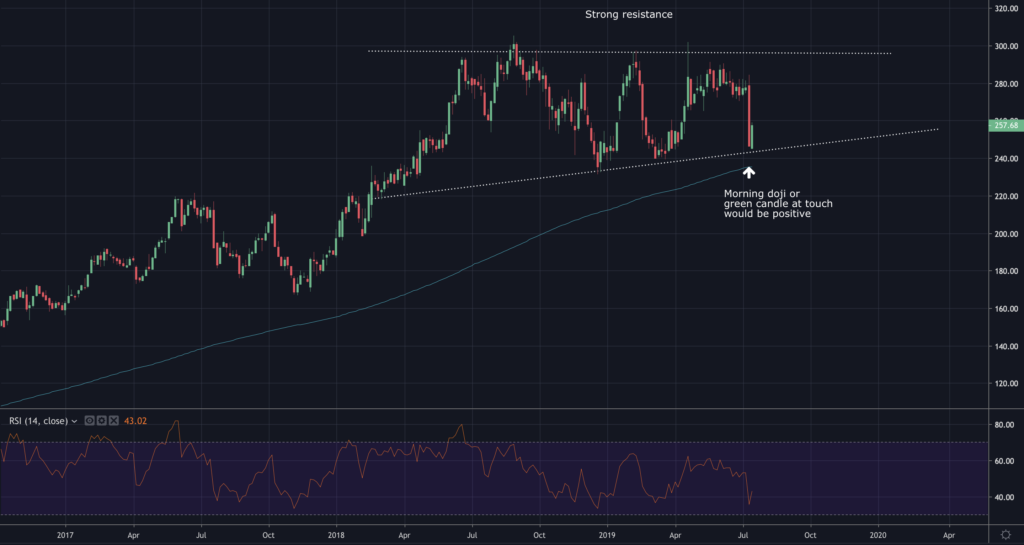 Then there’s iQiyi. IQ is a Chinese streaming-service company, much like Netflix. IQ is the second-largest streaming service in China, with around 100 million paid subscribers. Their business model also includes running ads and leasing merchandise rights based on their content. They do have a plan to expand internationally, trying to hit the Chinese population living outside of China.

Looking at the chart, we can see the hype has damped off. For the last months, IQ´s been doing higher lows and lower highs, creating a support and resistance line. More than that, the Fibonacci lines up with the trend lines. To summerise, IQ is closing the end of the Apex (support/resistance crossing). For now, I am not participating in this trade. But if IQ breaks upwards, I will be ready to take a trade. Signs to look for would be a mornings star or hammer doji. 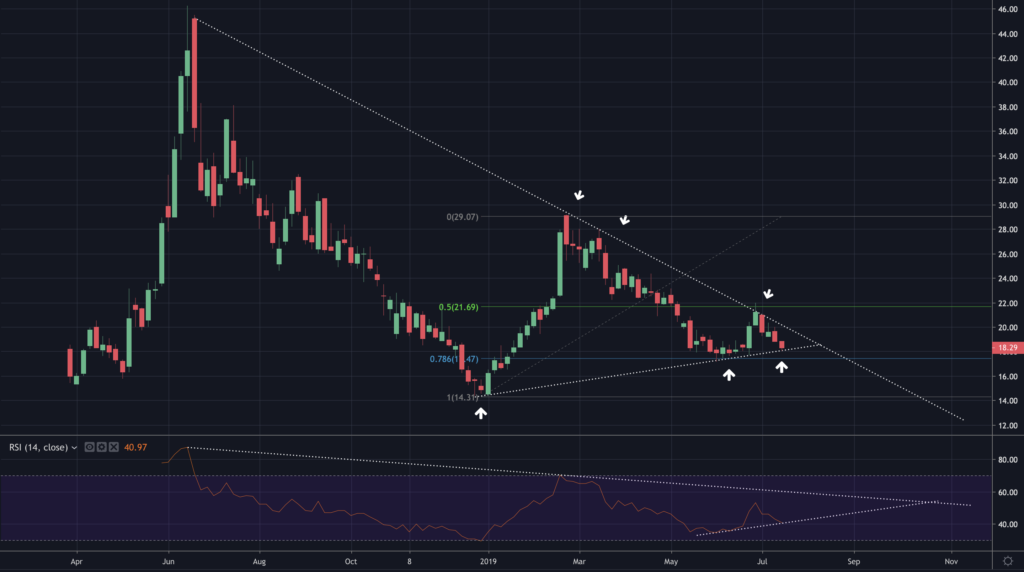 Netflix just reported a miss in their report, sending the stock down more than 10%. Netflix own projection was 5 million added subscriptions, Wallstreet had a little higher target, while Netflix ended up only adding 2.7 million users. There seems to be no single reason for this, more a mix of factors, like seasonality, price hike, not releasing any new content and so on. The report was much like this one; revenue grew, they simply missed on added paid subscriber domestic and globally. At the time of writing, NFLX has had a gain of more than 270%, with a high of 380%.

Like all companies, Netflix has its problems coming up. First, competition is heating up. Disney, Comcast, AT&T, and even Apple are launching their own streaming services. While HBO just took the number one rated tv-show with their new release Chernobyl. Now respectfully having spot number one and three, with Game of Thrones. Netflix holds the second and fourth place with Breaking bad and Rick n Morty. There will be a more detailed fundamental analysis on Netflix coming soon, for now, let´s look at the chart.

Netflix has been in a long bull trend. Before going parabolic thanks to hype, doubling their evaluation in less than 200 days. Since that time, things have slowed down. The two-year-long support is still in play, with a secondary confirmation at new-years eve. 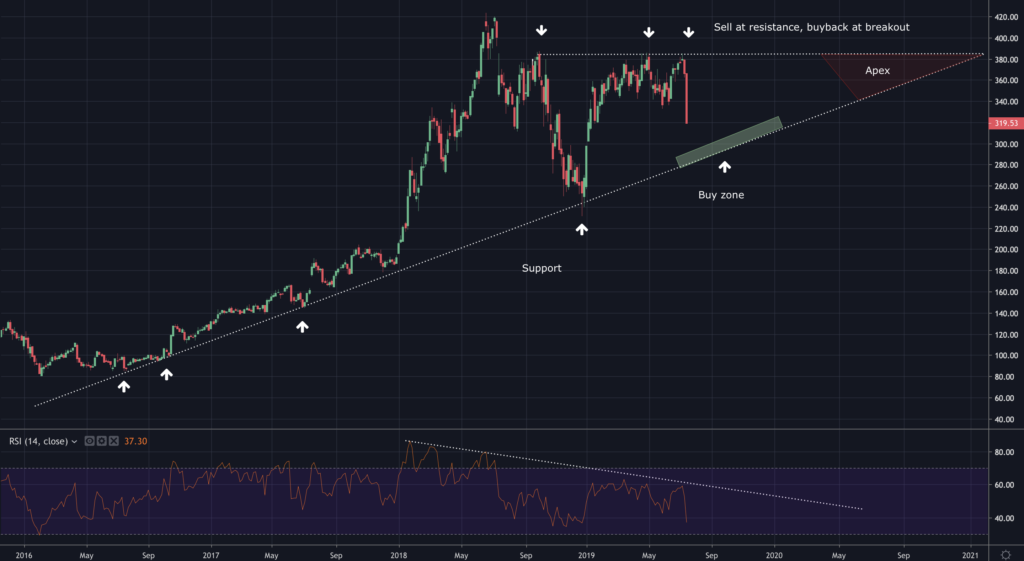 How I will trade it: I will use a technique called laddering. In other words, I will buy at several different prices. First, would be at today’s price of 318$. If the price keeps dropping and hits my buy zone (marked with a green rectangle), I double down. At this point, I set a stop-loss somewhere under the support. From this point, we need to pay close attention to the resistance line and Apex. If Netflix ends up hitting resistance and fails to break upwards, I´ll sell my position at a profit, and buy back at support. If the price where to resistance, the next target would be previous ATH, 420$. After that, the long term target would be 500$.

TOP 10 Stocks on the Jamaica Stock Exchange for 2020

May 3, 2019 0
Translate »
Want to learn more about the Stock Market and Investing?
Enter your name and email and get the our articles directly in your inbox... it's FREE!